Meteor is complete platform to build real-time web and mobile applications using JavaScript. Meteor is not framework or library which meant to help you to solve specific problems like Express framework to provide painless web development in Node.js OR django for python, instead its a framework which allow programmers to write high performance modern web applications.

Its good if you know Node.js before beginning with Meteor. If you are not aware then it’s not a problem, you may visit our lists of tutorial regarding Node.js to start learning it.

Why to use Meteor framework

Meteor provides all components you need to build the real-time web apps such as Node.js for Server, Mongo for database all designed around reactive programming model. So how does it help us to write the code, well here is the image to explain that.

Like I said and shown in image, Meteor is complete package like a car, what all you need is to drive.

Use one language everywhere

It’s JavaScript, from client to Server to database. Mongo is open source database engine which uses JSON. Meteor is build on top of Node.js which is in turn JavaScript and so any client library like Angular.

Reactive programming model is essential for real-time web applications. This model provides approach to handle the data flow on change ( Client side change or back-end side change ) .

With Meteor, you don’t need to worry about coding this model. It’s already there, just use it.

Meteor provides “one command deploy” option. They also provide sample app deployment on Meteor main site and that too FREE !

If you are on Mac, its simple and easy. Just run this command.

It will download and install Meteor in your system.

You should be accessing the Meteor from command line. type “meteor” and it will list down commands for you. Now you can create simple app using Meteor using following command.

Once completed switch to myApp folder and type meteor. That’s it. You should be seeing screen like this. 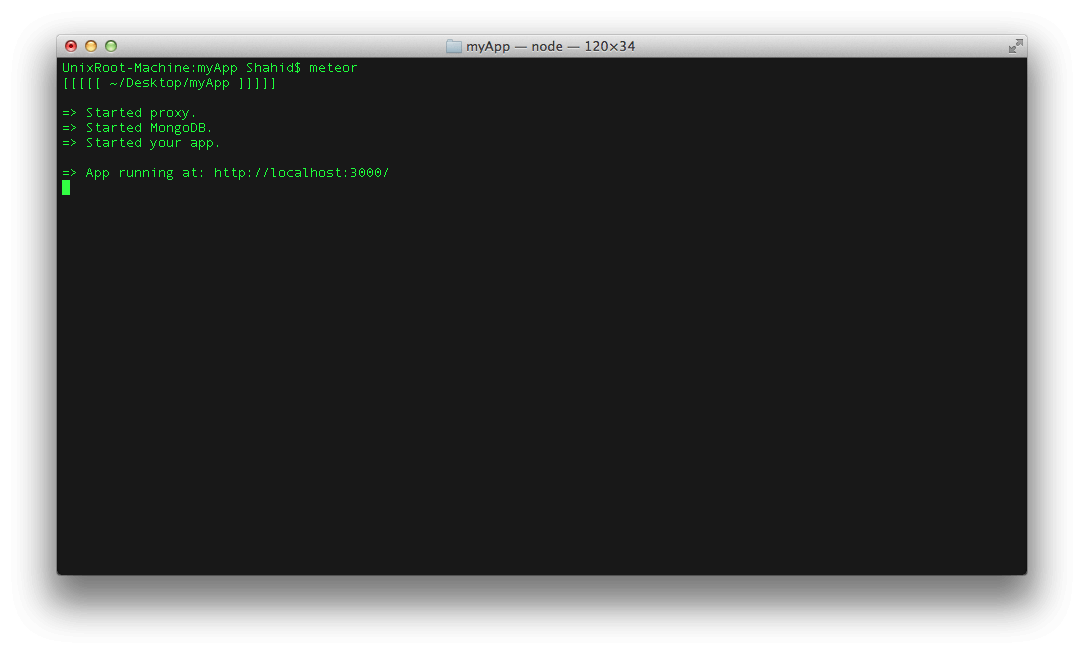 Visit localhost:3000 to view your app. 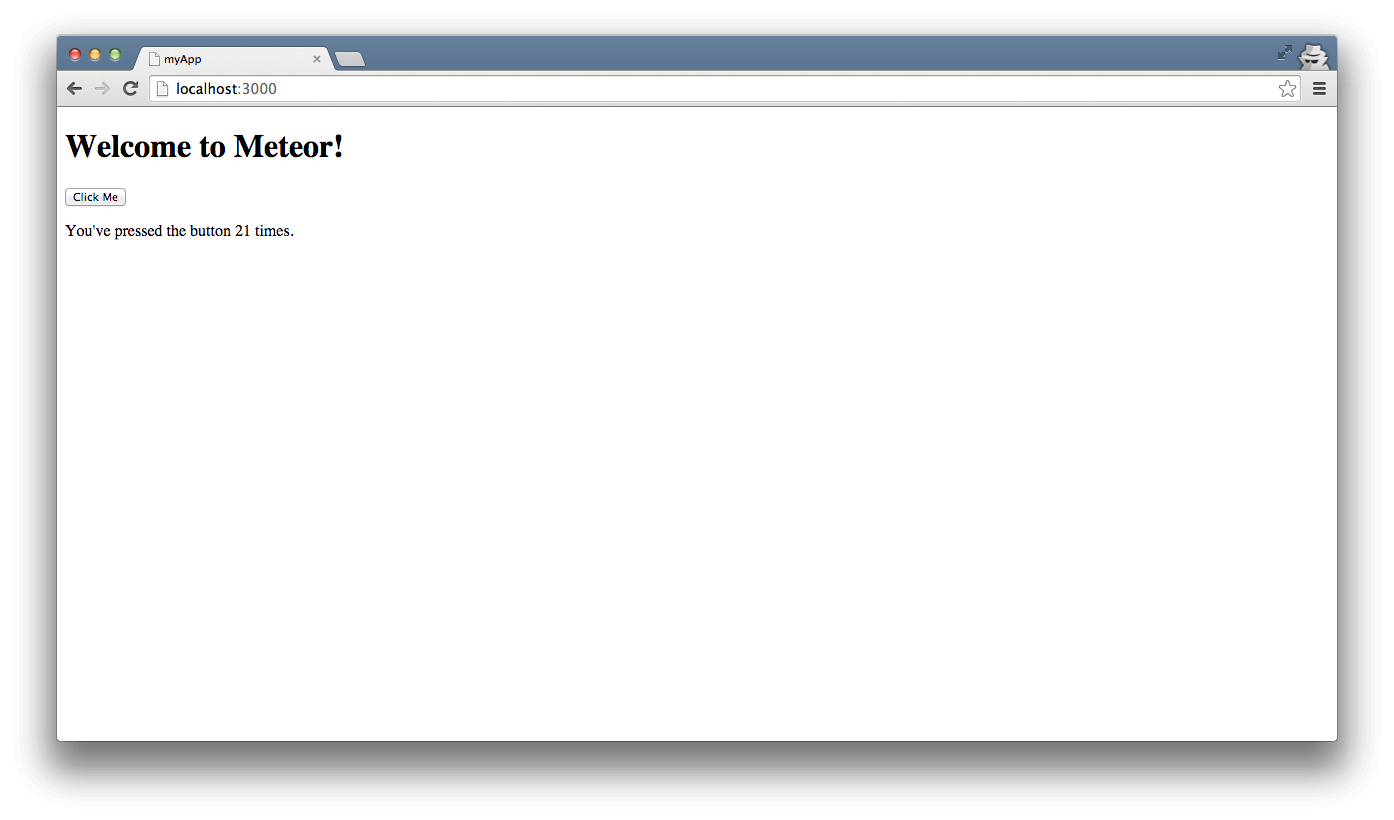 In any Node.js project, first entry point of code is Server file then routes and what to execute on those routes and finally delivering static files to client.

Meteor also uses similar approach but in more compact way. How its compact will figure it out. Meteor will create three file for this sample project.

Consider this as Server file for your Node.js application. Code block isClient and isServer differentiate between client and server. Will see about templates in next code.

Meteor introduces templates which can be accessible to client and as well as to Server. On client end

On client end you can add templates to BODY of html using {{> template name}} tag.

Helpers are very similar to Angular $scope we have used in Angular tutorials.

Helpers can be accessible to client using {{ helper name }} and on server-side using Template.templatename.helper

So when you load your app on browser, Meteor checks whether its client and if it is then it sets/resets the counter to 0. When you click the button, it fires event and that event captured by server to increment the count.

Above one was quick start app, Meteor also practical world example app called TODO. To create this app just open up your terminal and type this command.

This will take bit time so be patient. Once done switch to “todos” folder and type

Visit localhost:3000 to view the app. 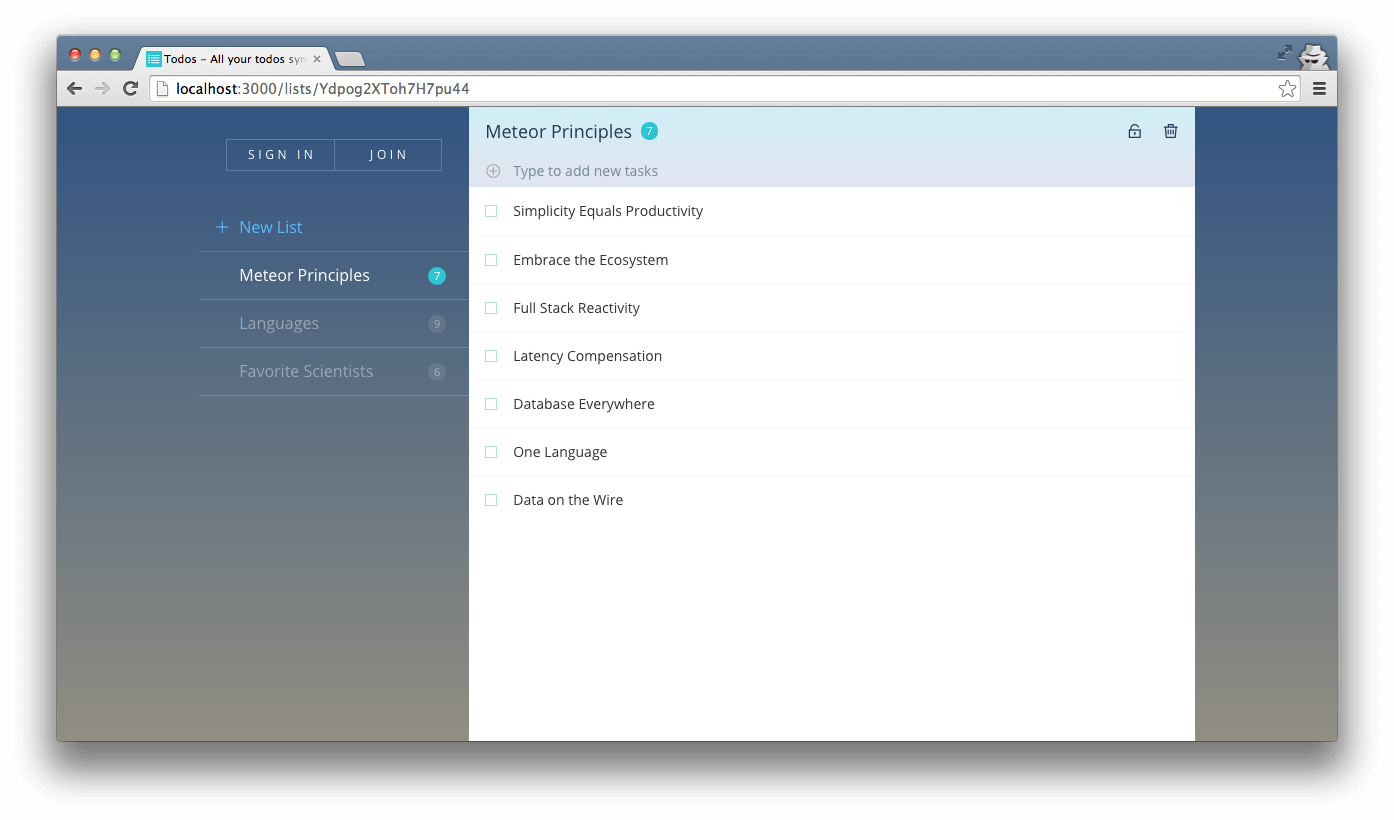 Its time for some proof of concept.

This todo app is written in approximate 600 lines of code. 600 lines including everything. This is really amazing cause to build such an app by configuring Server, Mongo, CSS and all data communication you really at least 1500-2000 LOC and may be more.

This part is interesting. As said, Meteor uses reactive programming model to capture the events and show the data live. Here is a proof.

Meteor provides Mongo access to browser console. Yes you heard me, in your console you can run almost every Mongo command to do debugging. Let’s do same here.

You must be able to see the single object.

Let’s add one more list and since its reactive it should reflect it right away on user interface.

Here is a command.

Here is the proof. 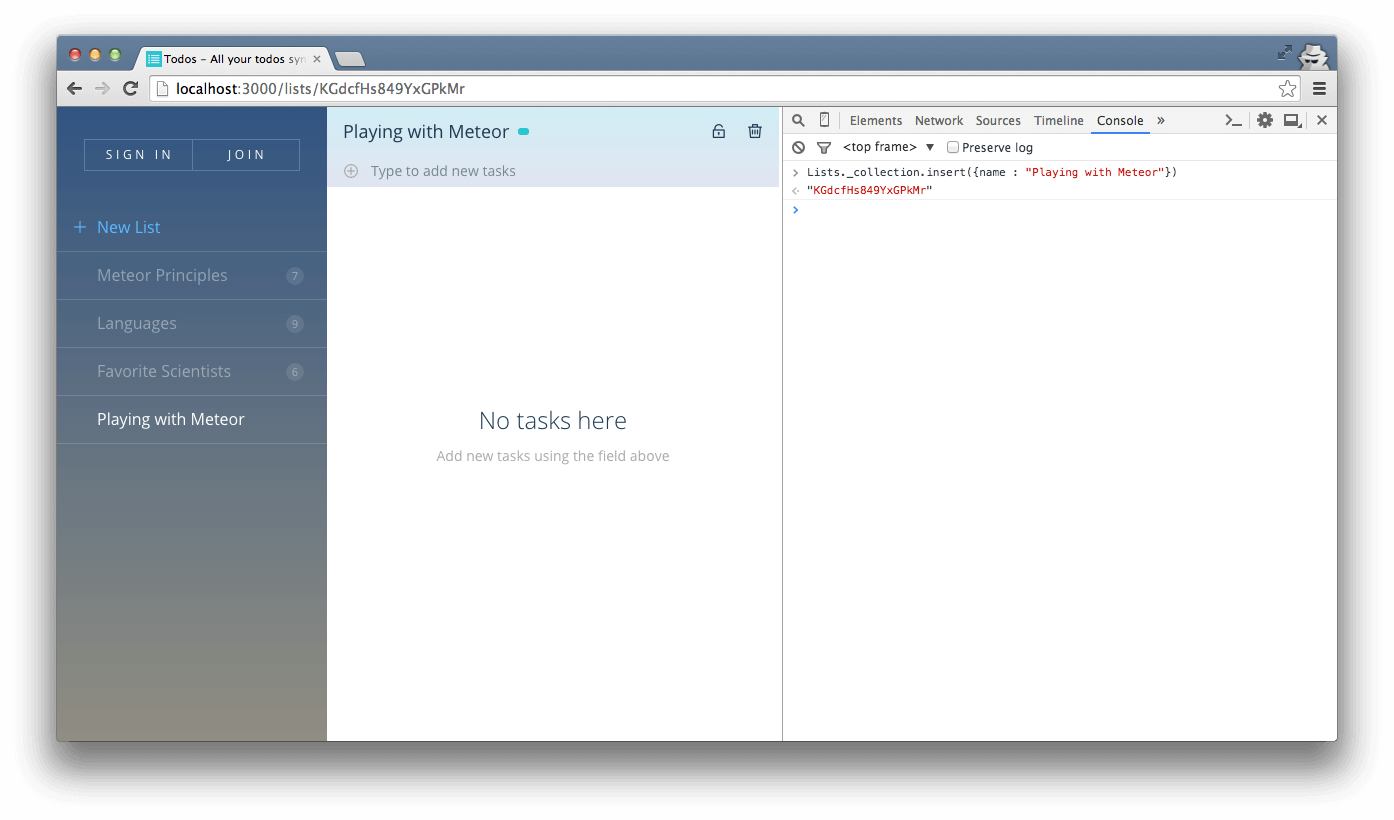 As soon as I press enter, it shows on UI immediately. You should feel like I felt, WOW 😀

You can use same todo app and compile it into APK and iOS compatible file and run it over there. Meteor deals with rest.

Meteor really provides very easy way to deploy your app. Suppose you want to deploy this one, just go ahead and create account on Meteor. Once done just run following command.

Meteor is really the next big thing. With all these features and programming pattern, they are really going to be on top framework used to develop web and mobile applications.

In next tutorials I am going to show you some real-time web apps using Meteor.js. Happy coding.

9 thoughts on “Introduction to Meteor.js framework”